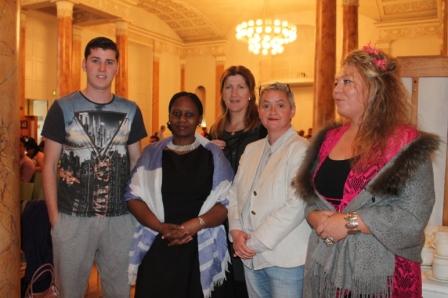 The awards were held in the Pillar Room in the Rotunda Hospital Dublin. The management team from Exchange House, which included Cathleen, William, and Penny, attended the event with the new chief executive Catherine Morley. This was an opportunity for the management team at Exchange House to officially present Catherine in her new position to our fellow organisations.

The staff at Exchange House was delighted to be able to attend the prestigious event and meet many of the people who attended and the opportunity to congratulate the receivers of the awards.

Anne Cassin presented the awards to those in the categories of Education, Arts or Culture, Music, Enterprise or Employment, youth, Sport and Community. Anne also received a gift for her involvement and dedication on presenting the awards each year as a way of thanks from all the staff involved.

The awards are organised by the Irish Traveller Movement, Pavee Point, Travellers MABS and many other Traveller organisations. The aim of the awards is to celebrate the achievement and success of people within the Traveller Community. The people who collected the awards had made positive contributions to the Traveller community and also to the wider society.

Overall it was a day full of celebrations, joy, pride and the bringing together of the Traveller community and all Traveller organisations. All who attended enjoyed the festivities and participated in the event with great pride. The staff of Exchange House who attend the event enjoyed themselves immensely and are looking forward to the event next year.

My Community 2020 "Sharing Our Digital Experience" event a success »